Tesla stock jumped as much as 6% on Monday after Elon Musk said its Model S Plaid will debut in China in March.The $130,000 vehicle goes from zero to 60 mph in less than 2 seconds and sports a redesigned steering wheel."We estimate the China story is worth $400 per share to the Tesla story for 2022," Wedbush said.

Tesla stock jumped as much as 6% on Monday as CEO Elon Musk said that he expects the Model S Plaid to debut in China in March 2022.

"Model S Plaid is sickkkk!!!!," he tweeted early Monday. Musk then responded to a question about when the vehicle will be sold in China with, "Probably around March."

The Model S Plaid features a redesigned steering wheel, more than 1,000 horsepower, and nearly 400 miles in range. The $130,000 vehicle can go from zero to 60 mph in just under two seconds and can hit a max speed of about 200 mph, making it one of the fastest production cars ever made.

The luxury sedan's imminent arrival in the Chinese market is vital to Tesla's bullish fundamental story, according to Wedbush analyst Daniel Ives.

He said in a note last week that China remains "the linchpin to the overall bull theses on Tesla," highlighting that the country will represent about 40% of deliveries for the company in 2022. Demand for Tesla vehicles has accelerated into year-end in China, with the EV maker at a 50,000 monthly run-rate for vehicle sales in China.

"We estimate the China story is worth $400 per share to the Tesla story for 2022 and are raising our price target from $1,100 to $1,400," Ives said. That represents potential upside of about 17% from current levels. Ives rates Tesla stock at Outperform.

Tesla's gain on Monday bucked the trend of other hot electric vehicle stocks like Lucid and Rivian, which were both down about 10% in afternoon trades. 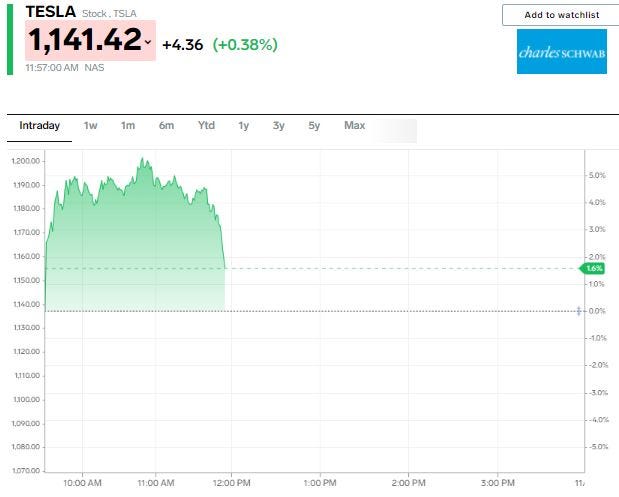