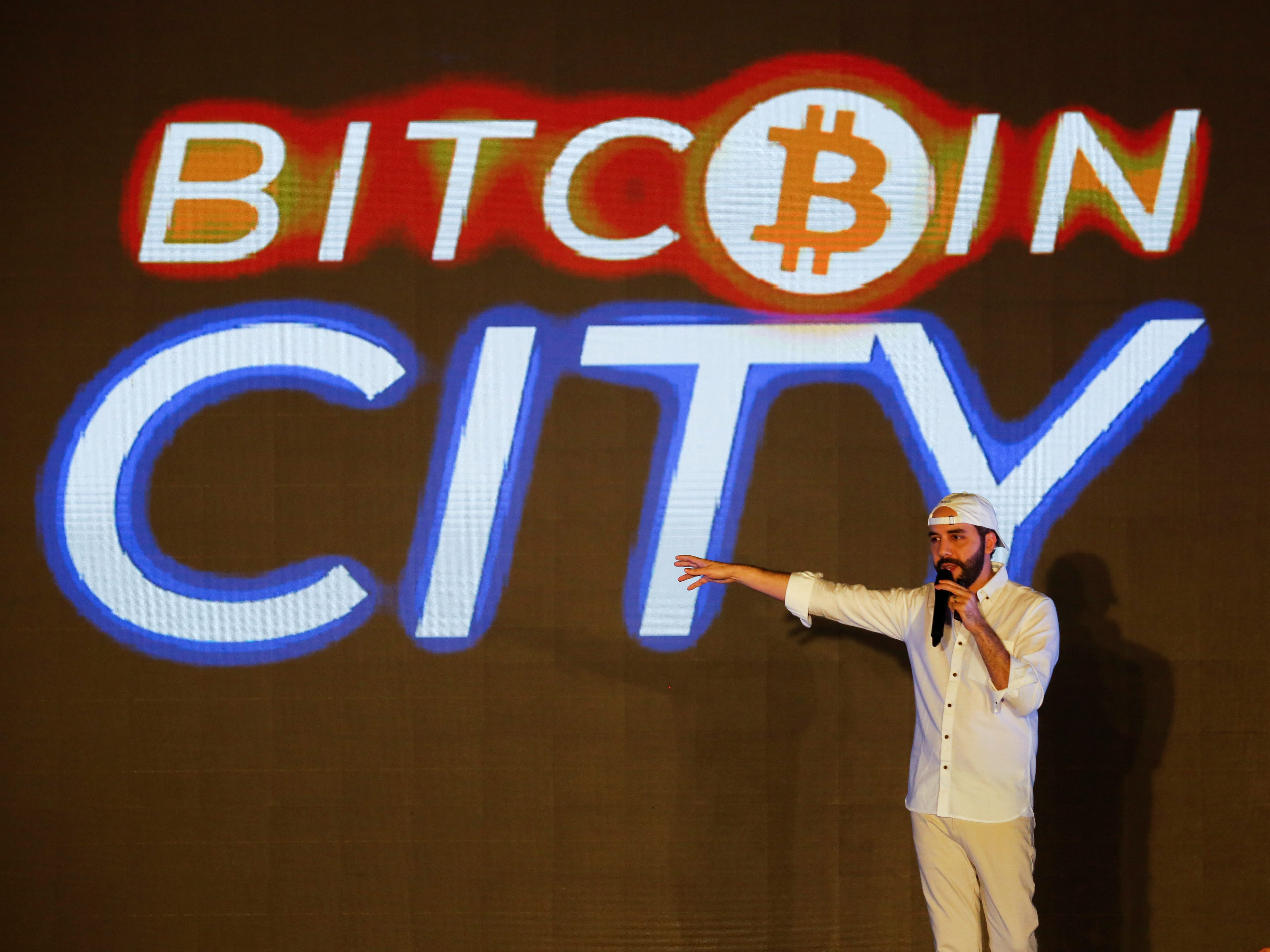 El Salvador plans to build the world's first "Bitcoin City," President Nayib Bukele said Saturday.
He said it would be funded initially by bitcoin-backed bonds and wouldn't levy any taxes, bar VAT.
Bukele said the city planned would get geothermal power from a volcano to mine bitcoin.

El Salvador plans to build the world's first "Bitcoin City", funded initially by bitcoin-backed bonds, President Nayib Bukele said on Saturday, doubling down on his bet to harness the crypto currency to fuel investment in the Central American country.

Speaking at an event closing a week-long promotion of bitcoin in El Salvador, Bukele said the city planned in the eastern region of La Union would get geothermal power from Conchagua, a nearby volcano, and wouldn't levy any taxes except for value added tax (VAT).

"Invest here and make all the money you want," Bukele said in the beach resort of Mizata. "This is a fully ecological city that works and is energized by a volcano."

Half of the VAT levied would be used to fund the bonds issued to build the city, and the other half would pay for services such as garbage collection, Bukele said, estimating the public infrastructure would cost around 300,000 bitcoins.

El Salvador in September became the first country in the world to adopt bitcoin as legal tender.

Although Bukele is a popular president, opinion polls show Salvadorans are skeptical about his love of bitcoin, and its bumpy introduction has fueled protests against the government.

Mining bitcoin is an incredibly energy-intensive process. Bukele said in June that El Salvador was exploring using volcanic energy to mine bitcoin, which he said could be a "very cheap, 100% clean, 100% renewable, 0 emissions" form of energy. He said on October 1 that the country had mined its first bitcoin using the energy.

Likening his plan to cities founded by Alexander the Great, Bukele said on Saturday Bitcoin City would be circular, with an airport, residential, and commercial areas, and feature a central plaza designed to look like a bitcoin symbol from the air.

"If you want bitcoin to spread over the world, we should build some Alexandrias," Bukele said.

El Salvador planned to issue the initial bonds in 2022, Bukele said, suggesting it would be in 60 days time.

Samson Mow, chief strategy officer of blockchain-technology provider Blockstream, told the gathering the first 10-year issue, known as the "volcano bond", would be worth $1 billion, backed by bitcoin and carrying a coupon of 6.5%. Half of the sum would go to buying bitcoin on the market, he said. Other bonds would follow.

After a five year lock-up, El Salvador would start selling some of the bitcoin used to fund the bond to give investors an "additional coupon", Mow said, positing that the value of the crypto currency would continue to rise robustly.

"This is going to make El Salvador the financial center of the world," he said.

The bond would be issued on the "liquid network", a bitcoin sidechain network. To facilitate the process, El Salvador's government is working on a securities law, and the first license to operate an exchange would go to Bitfinex, Mow said.

Crypto exchange Bitfinex was listed as the book runner for the bond on a presentation behind Mow.

Once 10 such bonds were issued, $5 billion in bitcoin would be taken off the market for several years, Mow said. "And if you get 100 more countries to do these bonds, that's half of bitcoin's market cap right there."

The "game theory" on the bonds gave first issuer El Salvador an advantage, Mow argued, saying: "If bitcoin at the five-year mark reaches $1 million, which I think it will, they will sell bitcoin in two quarters and recoup that $500 million."