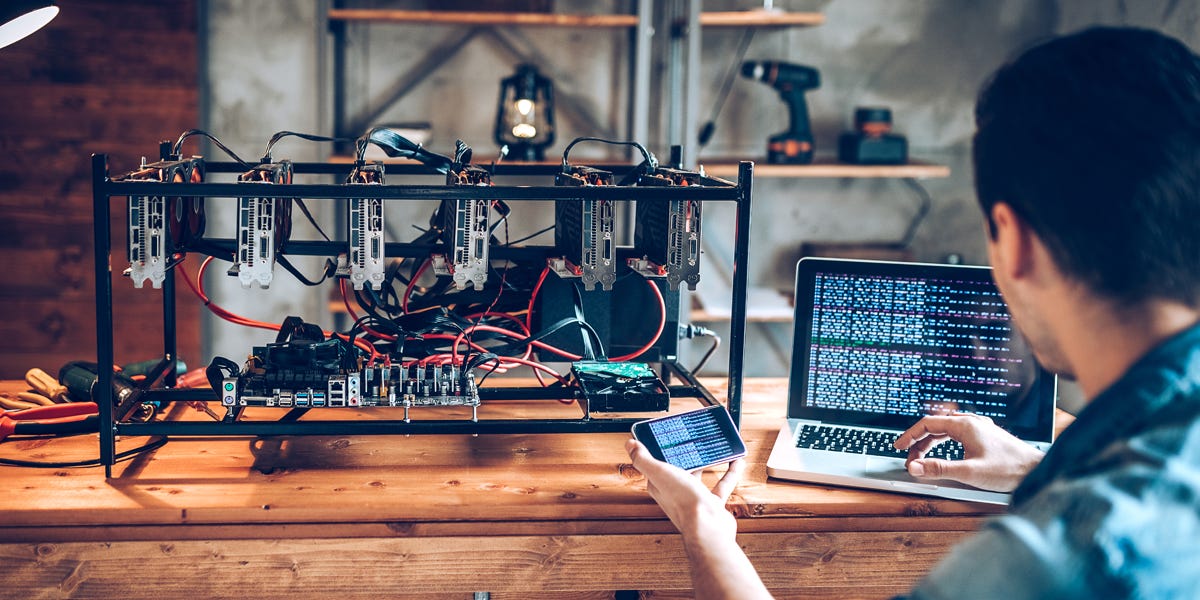 The rate at which new bitcoins enter circulation is reduced by half about every four years.

Bitcoin halving is when the reward for mining bitcoins is cut in half.
At the current rate that bitcoins are being produced, halvings happen about every four years.
Bitcoin halving is part of a system designed to cap the total number of bitcoins at 21 million.
Visit Insider's Investing Reference library for more stories.

Bitcoin halving refers to an event when the pace at which new units of the world's largest cryptocurrency entering circulation is cut in half.

It's part of an overall strategy to keep the maximum supply of bitcoins fixed, in contrast with fiat currencies like the US dollar, which have essentially unlimited supplies and lose value when governments print too much of it.

How does Bitcoin halving work?

To understand how Bitcoin halving works, first you need to know the basics of how the cryptocurrency is created.

Bitcoins come into existence by way of a decentralized system, in which people known as miners use high-powered computer systems to solve cryptographic puzzles in order to verify and validate transactions on the Bitcoin ledger, known as the blockchain. In return, they receive payment in the form of newly created bitcoins.Bitcoin mining is a competition of sorts. Miners are essentially racing to be first to add new blocks to the blockchain. For each block added, they receive a certain number of new bitcoins as a reward. The originator of Bitcoin programmed the block reward to be cut in half at regular intervals.

The reward for mining a block is reduced by half for every 210,000 blocks added. It currently takes some four years to add that many blocks, so Bitcoin halving has been occurring at approximately four-year intervals. The latest and third halving took place in May 2020. The next is expected in 2024.

Theoretically, once 21 million bitcoins have been created, no more will be produced.

"Just like there's a limited amount of gold on Earth, the amount of Bitcoin is limited to 21 million," says Buchi Okoro, CEO of Quidax, an African cryptocurrency exchange. "You could almost think of Bitcoin as a natural resource, but for the internet. That's why it's called 'digital gold.'"

Why do Bitcoin halvings occur?

Although who actually created Bitcoin remains a mystery, it is believed that the platform was put together in a way that would make it a deflationary currency — with purchasing power that increases over time.

With the halvings resulting in decreased mining rewards, creating new bitcoins becomes an increasingly expensive proposition. As time goes on, each coin becomes more and more valuable. This contrasts with currencies like the US dollar, which invariably lose their purchasing power over time.

Whether Bitcoin truly is a deflationary asset remains up for debate.

"If Bitcoin were accepted as payment for goods and services, it could be interpreted that way," explains Daniel Waterloo, adjunct professor of industrial technology and management at the Illinois Institute of Technology. "However, most businesses do not accept Bitcoin as payment, so this might not be a good way to measure its deflationary value."

Instead, Bitcoin's value is more linked to the economy where it connects to the "real world," such as the cost of the electricity required to mine the blocks and the willingness of people to pay for the bitcoins that are the rewards for that work, according to Waterloo. "Bitcoin is then deflationary in the sense that, over time, fewer coins are available to pay a relatively fixed electricity bill, so each coin needs to be worth more than the previous coins (before the halving event,)" he says.

Another theory for the rationale behind Bitcoin halving is that the cryptocurrency's creator wanted to have a larger proportion of coins being generated early on to entice people to join the network as miners.

What happens to Bitcoin prices during halving?

Historical data shows a correlation between Bitcoin halving and increases in the price of Bitcoin. Of course, price is affected not just by halvings, but by a whole host of factors. Here's a summary of what happened around the first three halving events:

First halving: At the time of the first halving, in November 2012, the price of Bitcoin stood at about $11. Within a year, it rose a hundredfold.Second halving: In July 2016, the Bitcoin network arrived at the milestone of 420,000 blocks, triggering a second halving. The price of Bitcoin fluctuated between $500 and $1,000 for a few months, and ultimately rose to around $20,000 by December 2017.Third halving: The third halving happened in May 2020, coinciding with another bull run for the cryptocurrency. At the time of this halving, Bitcoin traded at around $9,000. It climbed to around $30,000 by the end of the year.

"Early in the adoption cycle of Bitcoin, the correlation between price and mining rate was profound" says Tom Frazier, CEO of Redivider Blockchain, a Bitcoin mining fund. "Today and into Bitcoin's maturity, each halving is likely to have less and less impact on the price, especially as more countries adopt the cryptocurrency and a more stable technological and regulatory infrastructure is put into place."

As for the deflationary aspect of Bitcoin, we can look to history for context, according to Tracy Levine, Head of Data Analytics and Decision Science at the Blockchain Chamber of Commerce.

"Only three of the 64 total halvings scheduled to take place prior to 2140 have occurred," Levine says. "If the trend of higher highs and higher lows after a halving continues, the future price of Bitcoin should likewise continue to serve as an inflationary hedge against other representations of value that can be arbitrarily inflated."

What happens after the maximum number of bitcoins have been issued?

The last halving is predicted to occur in 2140, after which block rewards will not be in the form of bitcoins. Instead, miners will be rewarded with fees from network users, the people who buy and sell bitcoins, so that they are incentivized to continue processing transactions on the blockchain.

Bitcoin halving is a much-hyped event that has been happening at approximately four-year intervals, with the first one occurring in 2012. It's part of the programming underlying the virtual currency to keep its total supply fixed.As an investor, it's important to be aware of Bitcoin halvings, as they've historically caused significant fluctuations in the price. The next halving is expected in 2024.