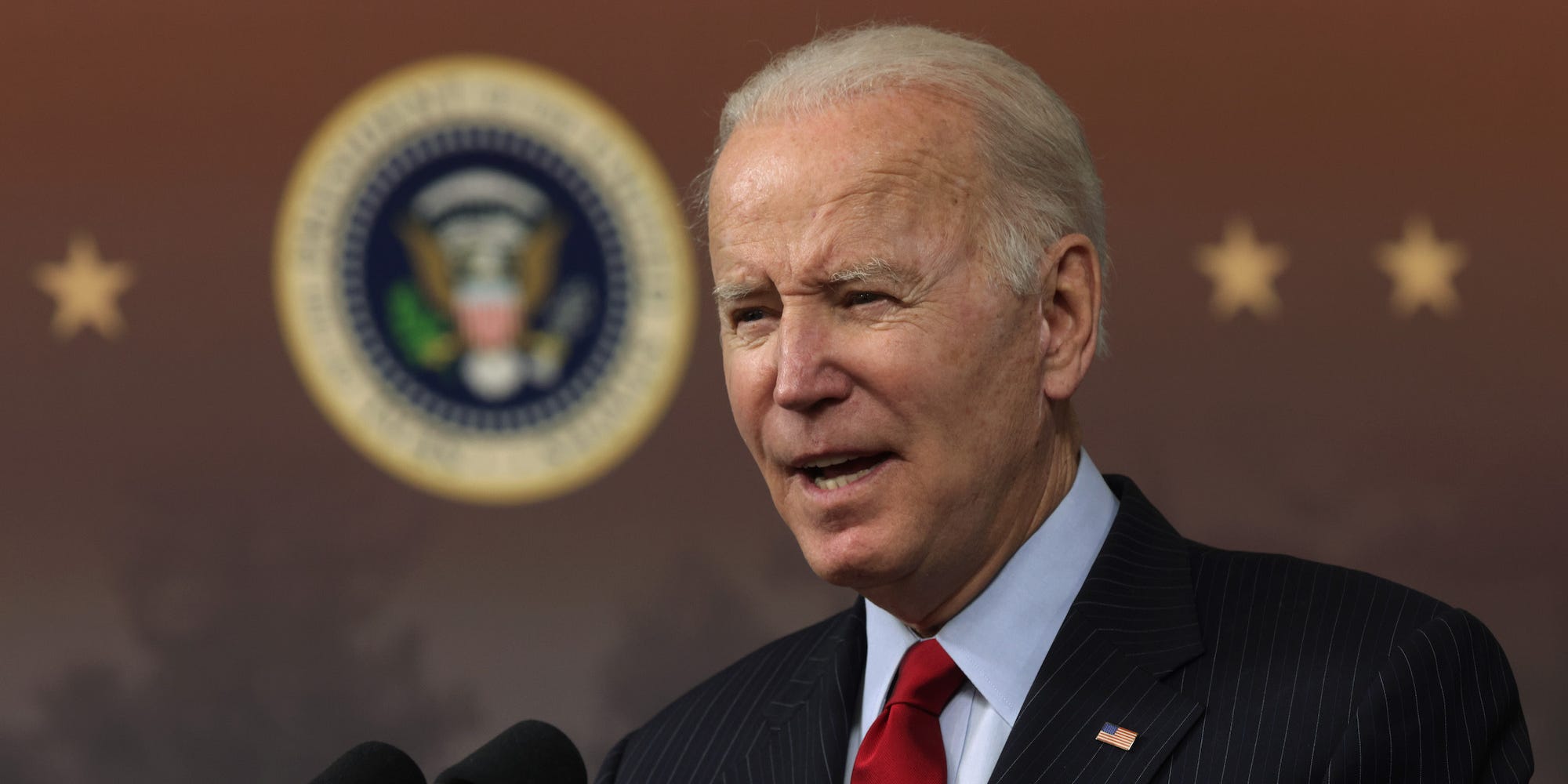 President Joe Biden speaks during an event at the Eisenhower Executive Office Building on November 23, 2021.

A Georgia jury found 3 defendants guilty of murdering Ahmaud Arbery during a jog in February 2020.
"While the guilty verdicts reflect our justice system doing its job, that alone is not enough," Biden said.
Biden also reiterated his administration's commitment to ensuring equal justice under the law.

President Joe Biden on Wednesday commented on a Georgia jury finding three defendants guilty of murdering Ahmaud Arbery during a jog in February 2020.

"Ahmaud Arbery's killing – witnessed by the world on video – is a devastating reminder of how far we have to go in the fight for racial justice in this country," Biden said in a statement. "Mr. Arbery should be here today, celebrating the holidays with his mother, Wanda Cooper Jones, and his father, Marcus Arbery."

Earlier on Wednesday, a jury in Glynn County, Georgia, found Travis McMichael, Gregory McMichael, and William Bryan guilty of murdering Arbery while he was on a jog through their neighborhood. The trio were pursuing Arbery in a pickup truck before Travis McMichael fatally shot him.

All three men pleaded not guilty to the charges, which included malice murder, felony murder, aggravated assault, and false imprisonment

"Nothing can bring Mr. Arbery back to his family and to his community, but the verdict ensures that those who committed this horrible crime will be punished," Biden said.

The jury selection process for the case ultimately lasted 2 1/2 weeks and resulted in the selection of 11 white jurors and just one Black juror, even though roughly one-quarter of the county's population is Black, Insider previously reported.

The president used the moment to reiterate his administration's stated commitment to racial justice and equal under the law, saying that he would work to ensure that equal justice under the law is "not just a phrase emblazoned in stone above the Supreme Court, but a reality for all Americans."

"While the guilty verdicts reflect our justice system doing its job, that alone is not enough," he said. "Instead, we must recommit ourselves to building a future of unity and shared strength, where no one fears violence because of the color of their skin."

Biden's statement echoes remarks that he gave last Friday in response to the acquittal of Kyle Rittenhouse — on trial for fatally shooting two men and injuring a third during civil unrest in Kenosha in 2020 — where he erred on the side of defending the justice system.

"I stand by what the jury has concluded. The jury system works and we have to abide by it," Biden told reporters at the White House on Friday. He later followed that up with a statement where he said he was "angry and concerned" about the verdict.

"I know that we're not going to heal our country's wounds overnight, but I remain steadfast in my commitment to do everything in my power to ensure that every American is treated equally, with fairness and dignity, under the law," Biden said in that statement.